Quite a few of us will have A/C systems that slowly fade away and lose the ice-cold feel. I had mine re-charged a couple of years ago and in the last few months it has slowly got worse to a point where it just bungs out air at the temperature it was slurped in. This is usually due to a slow leak in the A/C system that gradually reduces the system pressure to a point where no cooling action occurs. Rather than spend another £50 getting it regassed I decided to have a go at re-gassing the system myself.

The first time I tried this I got the gas from Ebay but I found a much better source next time:

This is the actual stuff I bought from Ebay: 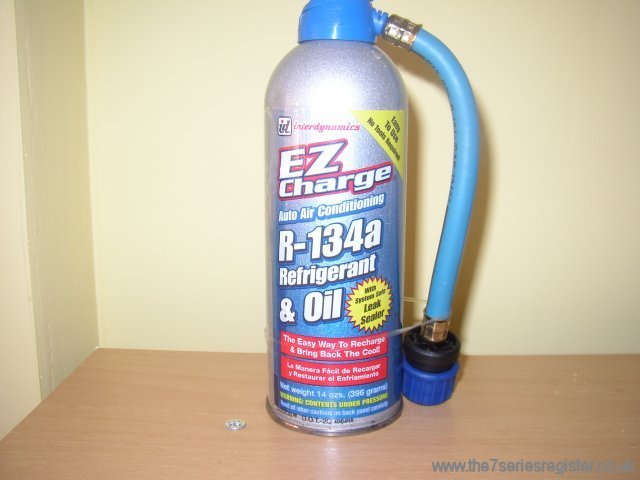 I paid around £20 including P+P, it turned up two days later

The next time I did a re-gas I bought a kit with a gauge and more refrigerant plus the leak-stopper:

This kit has a gauge and makes re-gassing so much safer as you can tell when the correct amount of coolant has been added. It is also cheaper as the gauge, tap and pipe work is reusable.

Now for some dire warnings:

If you do not follow all the instructions you may cause the can to explode.
If you get refrigerant on your skin it is going to hurt a lot
The parts of your body that are refrigerated may drop off

And finally, a few lines from BMW:

Never 'top-up' the A/C system. The system must be fully drained and then re-charged.

I don't know about you, but at this point I'm pretty scared!

Never one to shirk his responsibilities though I found some suitable protection before I started: 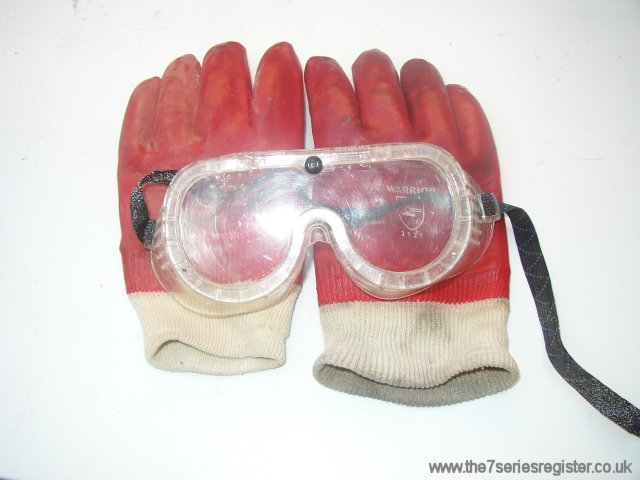 It's February at the moment and it's pretty cold. At this temperature you are going to have problems getting all of the contents of the can into your A/C system. This is because as the gas is removed from the can, the latent heat of evaporation drops the temperature of the can significantly. It will get to a point where there is not enough latent energy left to overcome the system pressure.

I've come across this problem quite a few times before but with CO2 rather than R134a. The problem occurs when you try and remove lots of gas quickly and the cure is to give the refrigerant more energy to start with. This is done by warming the can to start with. Here's another dire warning: 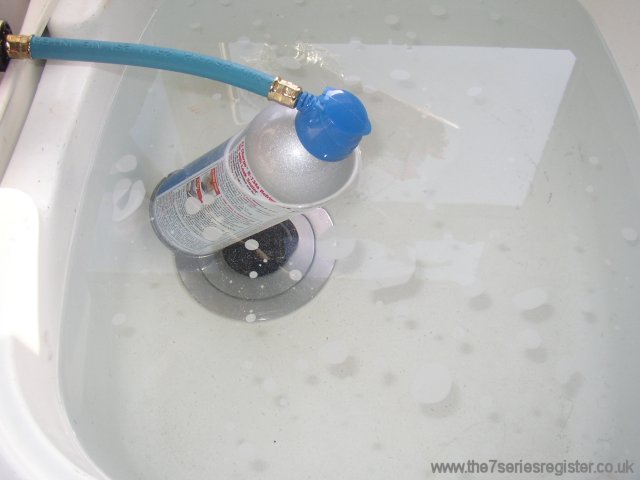 50 Degrees C is about as warm as a bath, so don't get it any hotter than that!

I had a cup of tea while it warmed up.....I shook it now and again to jolly it along.

Right, the next bit is connecting the can to the car's A/C system. More dire warnings:

The can must be connected to the low pressure (return) connection, connecting it to the high-pressure side will cause the can to explode

I don't know about you, but I'm going off this whole plan! The next important bit is to find the correct connector, we are obviously after the LOW-PRESSURE connector. There have been a few false calls on this one but I am pretty clear on it now. Fortunately, there is no way the EZ-Gas connector fits on the high-pressure connector as it is smaller than the low-pressure connector.

Here's my tips for finding the right connection: 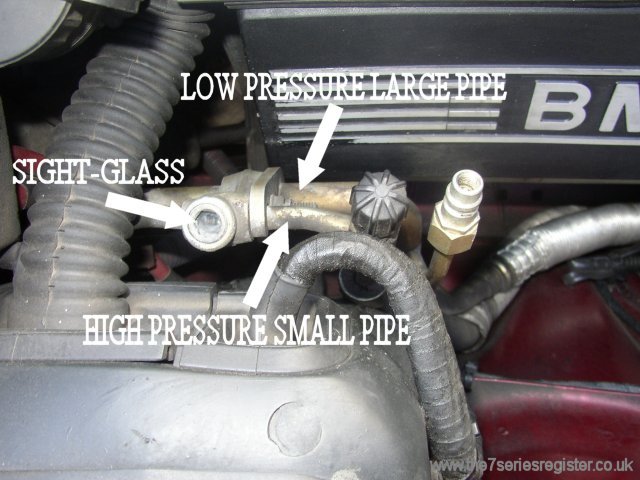 Fortunately, you will find that the connector will only fit the low-pressure connector, the high-pressure connector is a lot smaller. If your car has a sight-glass then give it a good clean, fire up the engine and turn the A/C on full. If your system is operating but short on gas you should see bubbles going past: 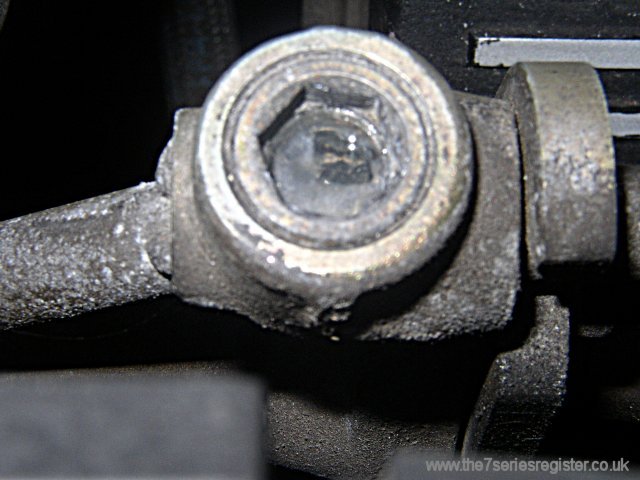 If you have a huge leak and all the gas is gone, you are NOT going to mend it with this little can of gas. If, like mine, it just slowly got warmer and the clutch still engages then you have a pretty good chance of making it work again.

Still keen to do a re-charge?

Right.....I've got my goggles on, I've got my gloves on and my can is rather warm. I've got the engine running and the A/C is on MAX COOL. The clutch is engaging and I can see large bubbles going past the sight-glass. With some trepidation I connect the bottle to the low-pressure connector (after finding it didn't fit the high-pressure one....thank goodness). The method is to lift the blue-collar, push the connector on and then push the blue-collar firmly down. You definitely need gloves, don't try this without them. 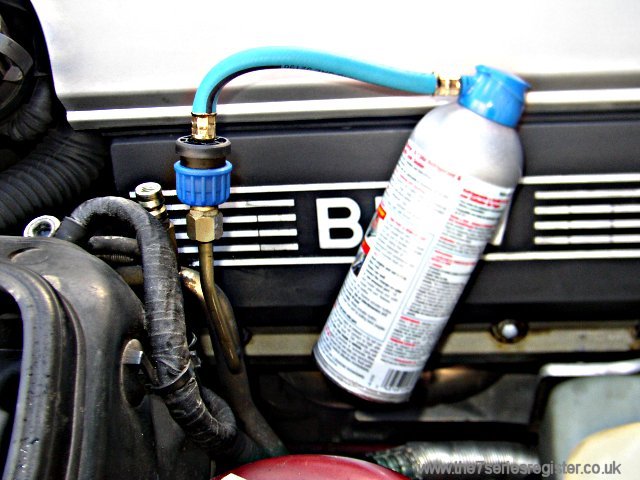 The picture shows quite clearly that the low-pressure connector joins onto a large-bore pipe, much larger than the high-pressure pipe-work

The can has a Spitfire-gun button with a protective cover. This lifts up and the 'button-of-death' can be found inside. Go on, press that button firmly, you know you want to..... 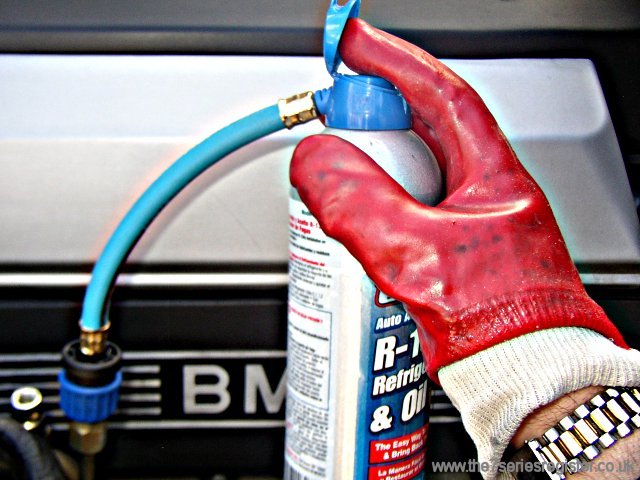 There is a kind of rumbling / hissing noise and the bubbles within the sight-glass get smaller. I shake the can as instructed. After a while the hissing stops, unfortunately the can still seems to be half-full......

I take off a glove and feel the can....it's freezing cold. Time to warm it up a bit again: 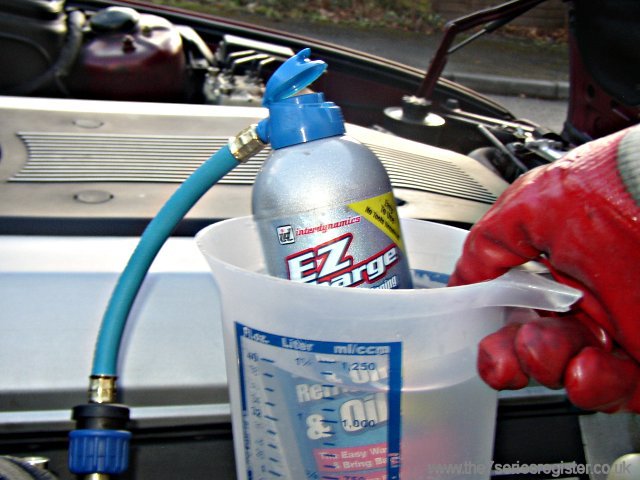 The instructions on the side of the can tell you to keep going until the can is empty, but I'm not going to risk trying to compress a liquid inside the compressor. I disconnect the can and would guess that I have got around a quarter left. The A/C is ice-cold, if I need the gas later I can use it again!